Unfortunately, you might know it well. But what do we really know about PMDD.

First we should know how PMDD shows up.
To know you have it, symptoms need to recur cycle to cycle and interfere with your life around the time before your period begins. The symptoms to recognize are:

Not an ideal way of spending half the year.

How do you know you have PMDD?
Diagnosis is half the battle because there are a few PMDD lookalikes. A PMDD aware healthcare provider will help you rule it in or out. Some clues are:

1. You feel great during pregnancy. Not ovulating means no major hormone drops.

2. You feel the best the two weeks after your period. Pre-ovulation also means no major drops in hormones. At this point they only rise.

3. You satisfy the criteria of PMDD medical questionnaires. There are a variety of online self-questionnaires that you can Google. One of them is https://iapmd.org/self-screen

Where does PMDD come from?
Genetics is one reason. This doesn’t mean you can’t change it. More on that in a minute.

History is another. Many with PMDD have a history of trauma that primes the nervous system to be vulnerable to hormonal fluctuations like those before the period.⁠ The nervous system is at its most sensitive during PMS time.

Why the second half of the month?
There are hormonal fluctuations throughout the entire menstrual month so why aren’t you affected at ovulation or just after your period ends when estrogen skyrockets? Well, it seems that the most triggering changes are when hormones are in their decline. As in, right before the period begins. To make matters worse, there are multiple hormonal peaks and valleys during PMS, which means multiple declines. For some that translates to a hellish two weeks. 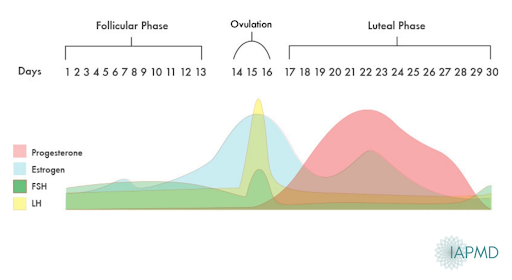 Why is your mental health so affected?
We know that estrogen and progesterone both have potent effects on the chemicals that make us feel emotions and influence our thoughts. Serotonin, adrenaline, and dopamine are the big three chemicals that control much of what happens inside our heads. Serotonin is probably the most impacted by hormone fluctuations. We see that those with PMDD have abnormal serotonin pathways and lower amounts of nerve receptors to communicate with serotonin, which in most people causes agitation, depression and sugar cravings. This may be in part why serotonin anti-depressants work here.

How do we get rid of it?
Holistically.
And with team work.

Antidepressants, when tolerated, are rapidly effective when taken even just for 7 days before the period begins. This is not normally how they work for depression. The rapid short-term effect is more specific to PMDD. It’s a good strategy for those who don’t like to take daily antidepressants because of unwanted effects like low libido. There is also very low risk of withdrawal since the drug has not accumulated in the body long enough.

Hormone treatments are also standard.
We can shut down the menstrual cycle all together and induce chemical menopause which is a very successful treatment, but not for all and not without its negative effects. Surgery to remove the ovaries is also an effective treatment, albeit usually last on the totem pole.

Your run of the mill birth control pills are also often prescribed for PMDD, but don’t necessarily work well since there is still a break between pill packs to allow for bleeding. So, continuous birth control performs much better. You take the pills every day with no break to prevent any drop in hormones.

Having said that, some brands like Yaz work well even non-continuously because of inherent beneficial effects of the specific kind of hormone in that pill. The chemical, drosperinone, is effective for helping reduce irritability and is a good diuretic which aids in bloating. Yaz also has fewer sugar pills (4), leaving less time for a decline in hormone levels. Like many drug treatments though, Yaz and Yaz-like pills have their draw backs including increased blood clotting.

Progesterone therapy
To avoid the risks of the pill, some ask why not just take progesterone on its own? If PMDD occurs when progesterone is fluctuating, why can’t you just take it as a stand alone treatment? The problem is the eventual change in hormones not the absolute amount. When we shut down ovulation with drugs, we usually have to replace the lost hormones to make sure we aren’t causing other issues down the road. This is called add-back therapy. When you do add-back hormones, it can cause PMDD to return. Then it improves over time. The zero to 100 is probably just too much of a jolt for the unassuming nervous system.

Often giving just progesterone makes matters worse. It can even encourage suicidal thoughts and actions when they weren’t present before. You can appreciate why we have to be careful and confident with our diagnosis. For those who thought they have PMDD or were told they have PMDD and took progesterone and it worked, there is a good chance you didn’t have PMDD. You might have another condition like a luteal phase defect or PCOS that benefited from some more hormone.

So much to try
There are plenty of other therapies to consider and some are really effective dependent on the person. Discuss their use with a healthcare provider well versed in their proper use, like the docs at Mint.

Raising the bar
There are many different approaches to treating PMDD. Often the aim is to raise your biological and chemical thresholds so that stresses or hormonal changes aren’t as re-traumatizing to the nervous system as they might have previously been. If you need any support with PMDD connect with a naturopathic physician at Mint Integrative Health.–